Wildlife in a City Pond

It was dark outside and I could not see much from my window. I had just moved that evening into a new house in the city of Pune, in India. There was a deafening cacophony emerging from the dark, as if hundreds of badly tuned radios were crackling away! It was only in the morning that the mystery began to be solved. There, below my balcony, was a small pond in an abandoned quarry. I realized it must be inhabited by many of the animals that woke up only at night! 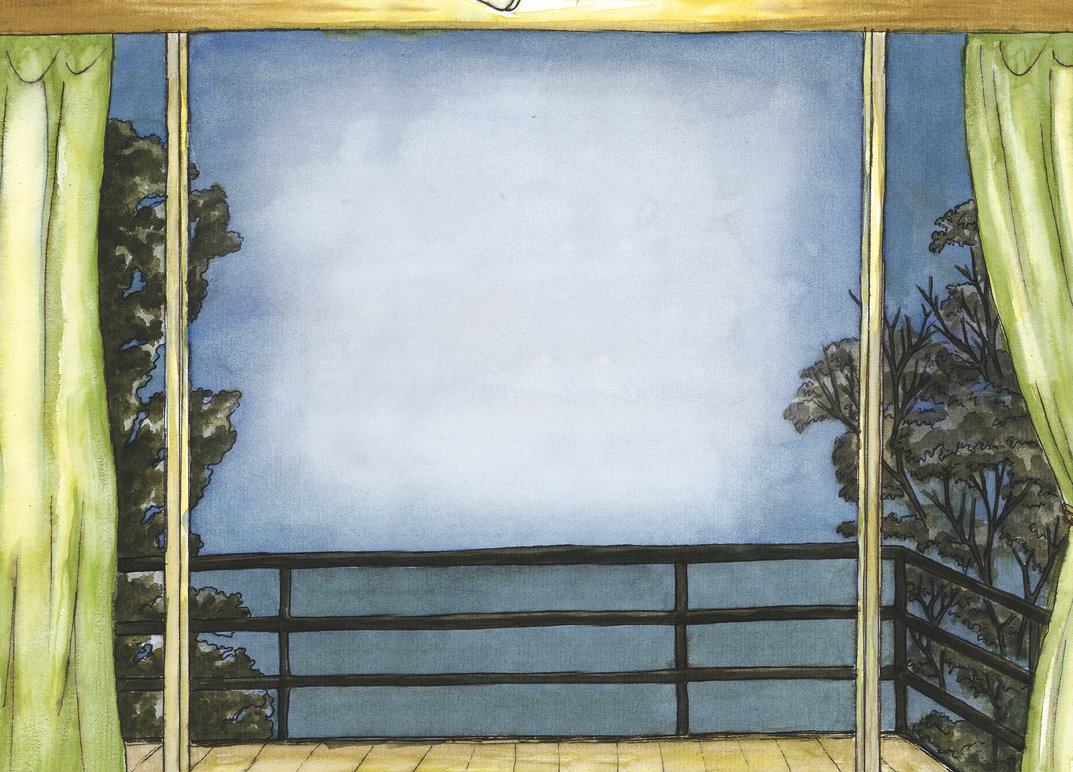 Over the next year, I watched the pond undergo incredible transformations through the seasons. In summer, the area looked like a dry, lifeless barren depression. But come monsoon and life burst out like an orchestra, waiting for the conductor to give the signal! The first raindrops on the thirsty land gave off a lovely earthy smell. But they also did what no magician could do, turning the brown earth into an oasis of green and blue. 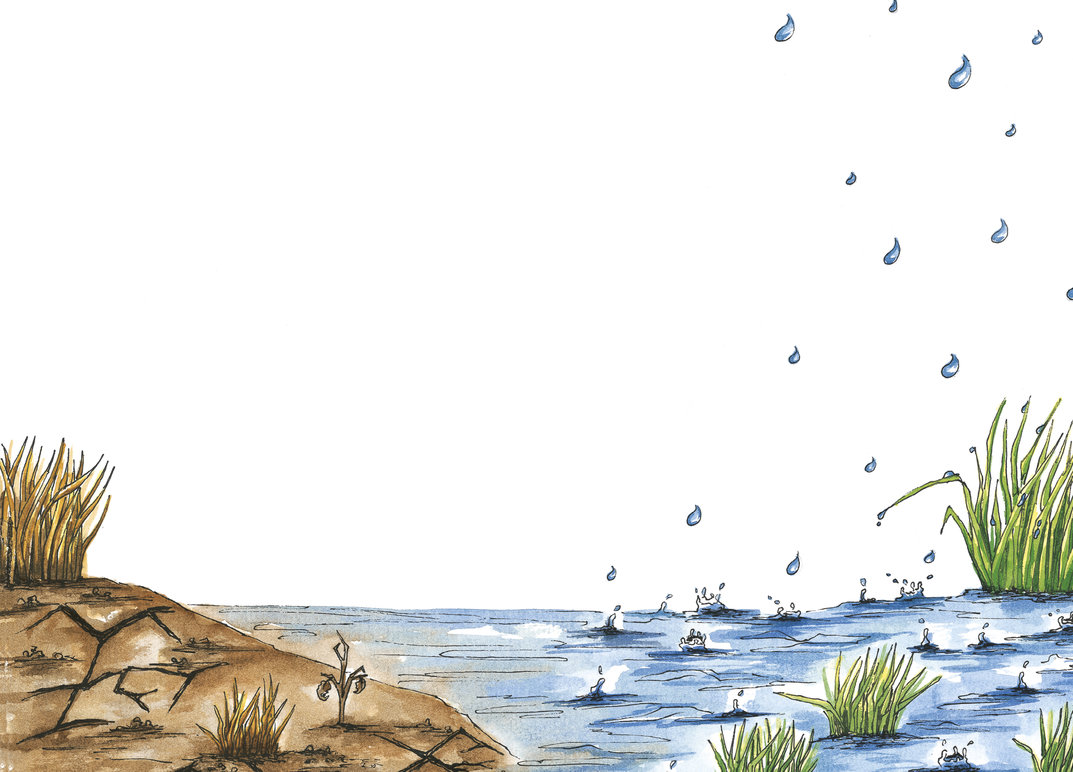 Within a few days, blades of reeds were glistening silver in the sun. Plants that had seemed forlorn and dead suddenly stood proud and tall. The chocolate brown rods of the typha plant swayed in the wind, as cottony flowers from nearby trees drifted everywhere. 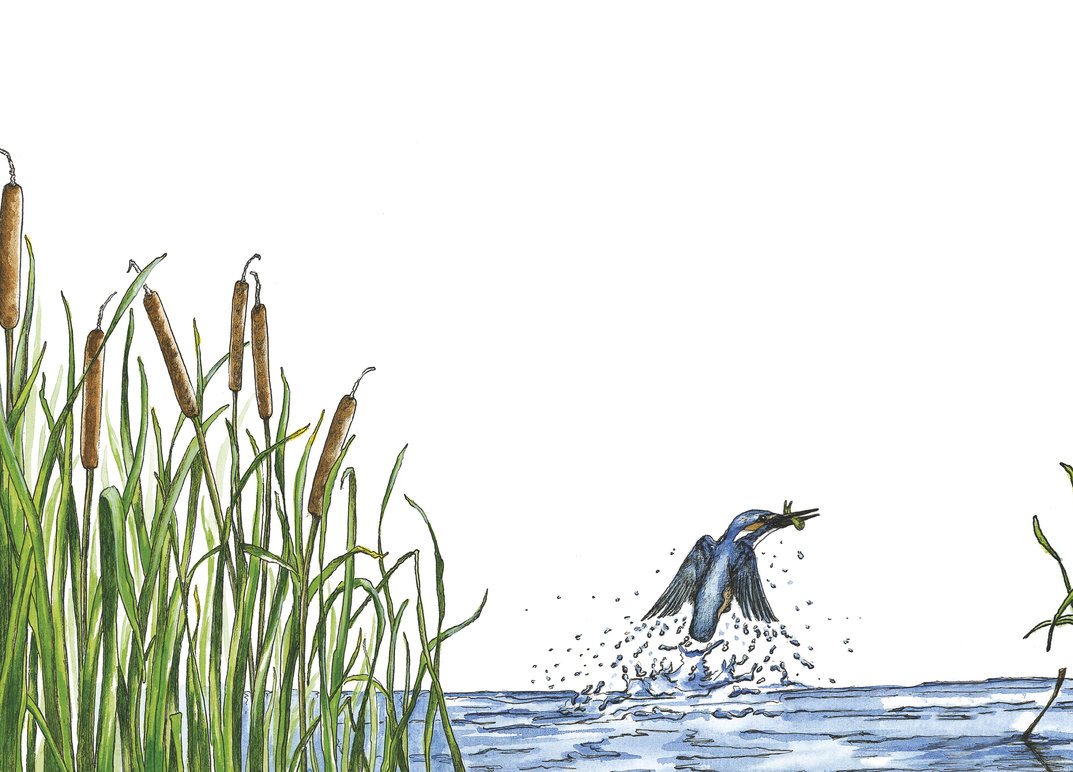 Other creatures too joined in nature’s dance. Brilliant blue kingfishers waited patiently on branches, suddenly swooping down to catch a fish with a splash. Baya weaver birds and scaly-breasted munias picked on the reeds to carry off nesting material. 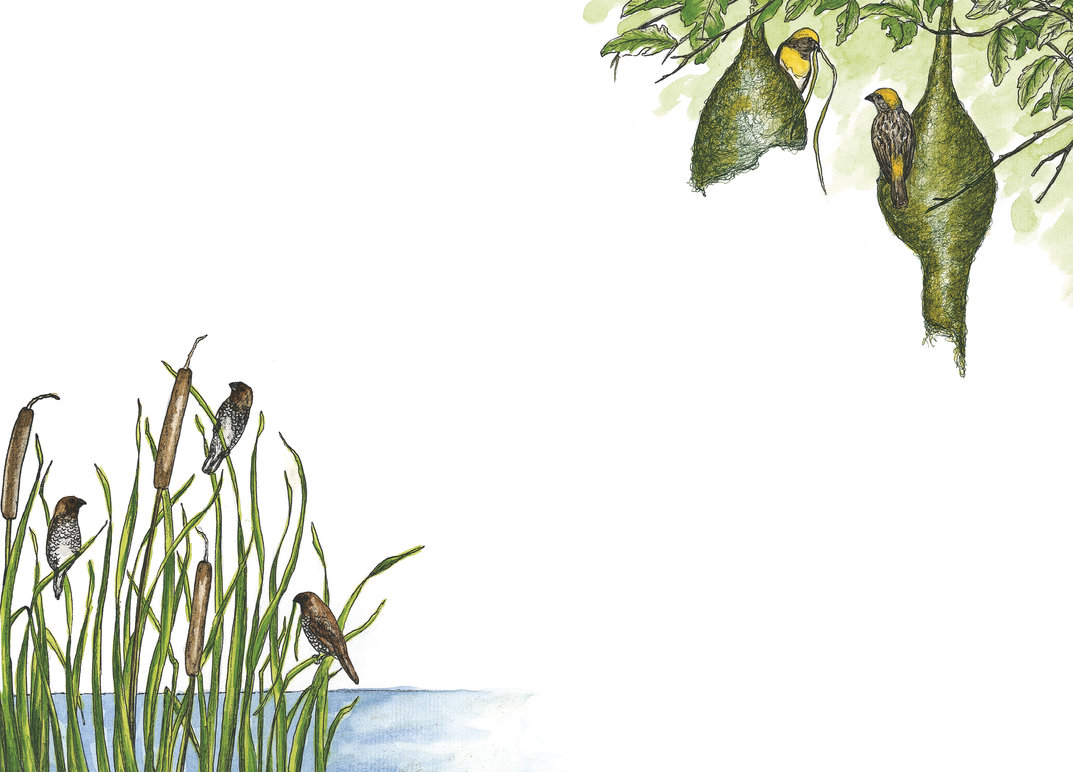 On the slopes near the pond, a pair of lapwings scurried around. Were they protecting their ‘nest’, a small depression in the ground with eggs that looked just like the earth? I think so, because every time any person came anywhere near, they would burst into noisy flight with a high pitched call of ‘did-you-do-it, did-you-do-it’. 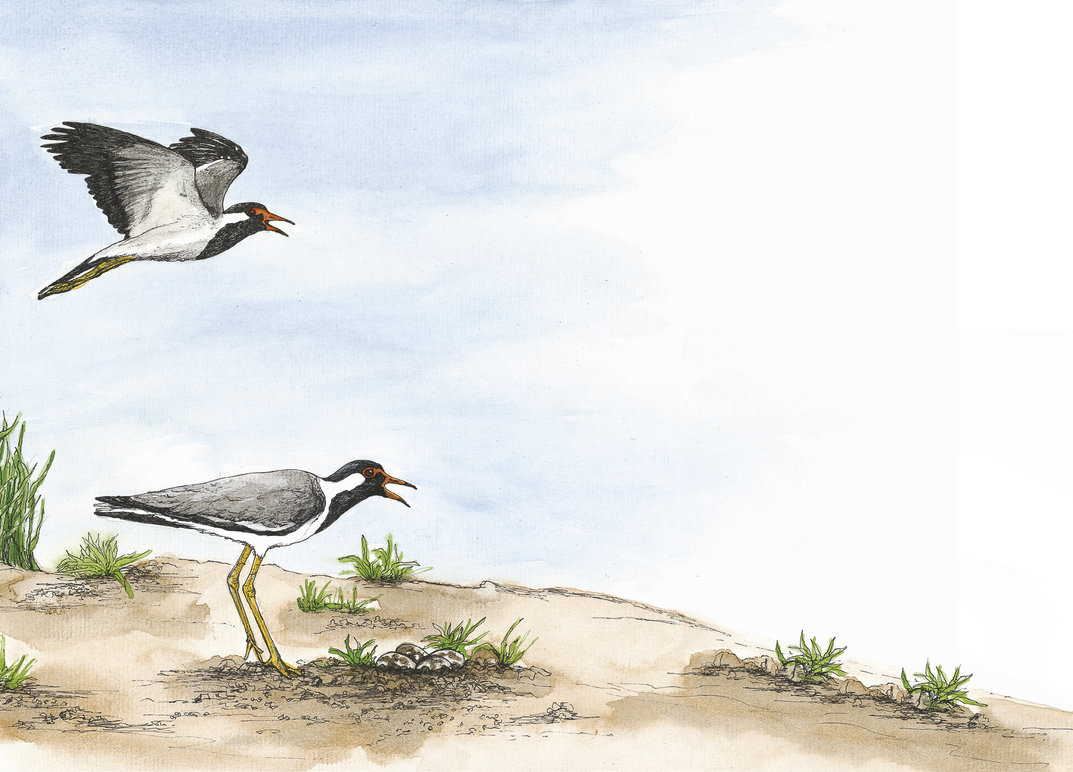 In the water, I noticed some rocks glistening in the sun. But as my binoculars focused on them, I was shocked. They were turtles! And then I saw movement under the water: more flapshell turtles, swimming with only their head sticking out. Just a week back, the ground was barren. Where did the turtles come from? I learnt from a book that they slept under the ground during the dry summer, waiting for the pond to fill up again. In their honour I started calling it the Flapshell Pond! 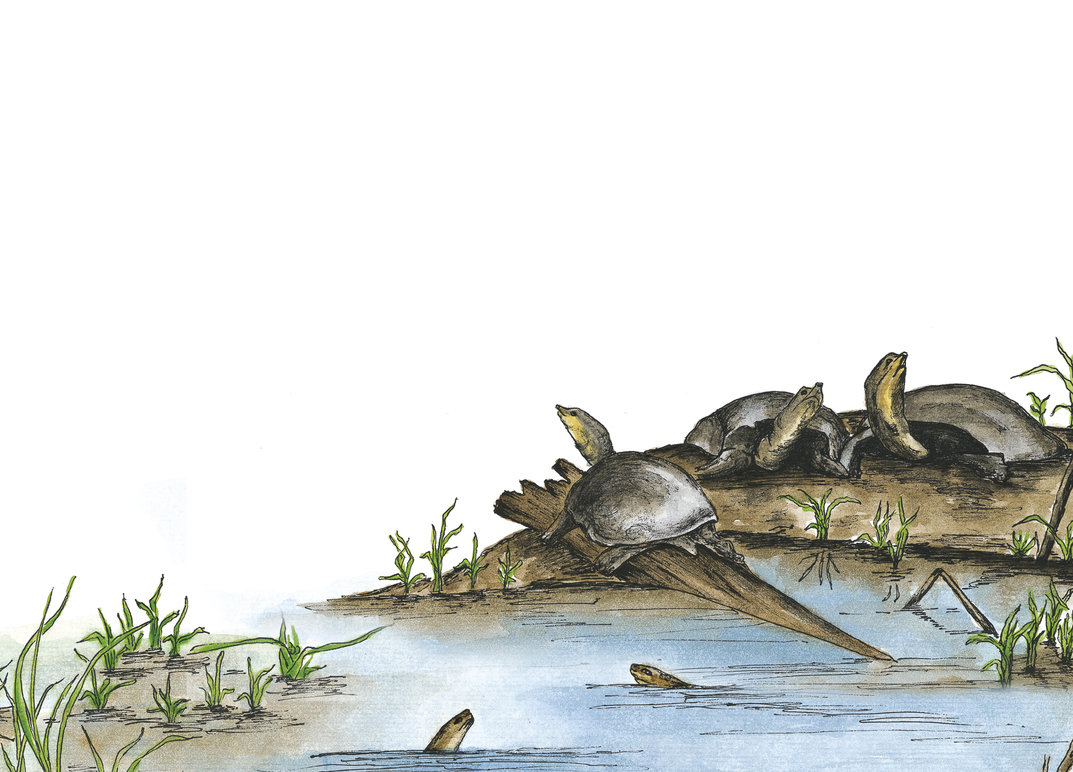 Several birds walked around the turtles, who peacefully ignored them. The white-breasted waterhen walked with a deliberate gait, looking for food. A couple of pond herons skulked through the tall reeds, wary of possible danger from birds of prey. And as the monsoon progressed, a pair of spot-billed ducks would land on Flapshell Pond, hunt for snails and waterplants, then take off to other natural ‘restaurants’! At times the air was full of flying insects: brilliant red dragonflies, butterflies of various hues, and delicate damselflies visible only at a close distance. Insect and bird calls in the day created a different monsoon symphony than that of the night. 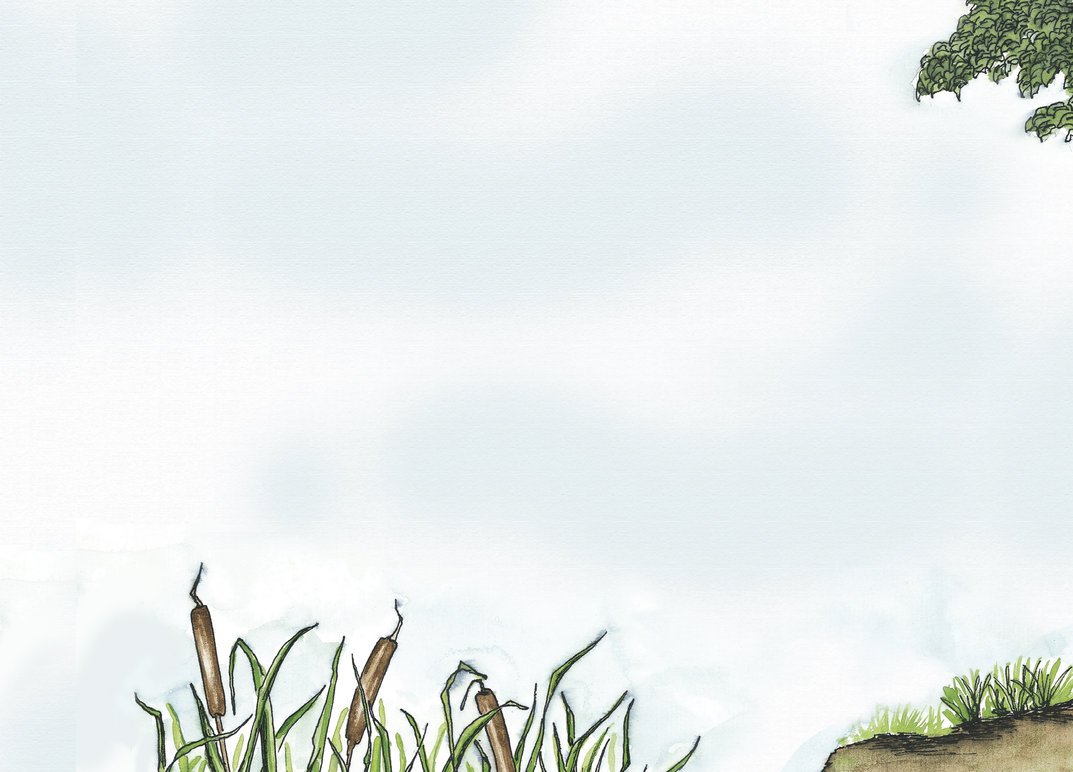 I thought that such a small pond could not have any mammal, but was I mistaken! I would often see shy mongooses come to the edge of the water, and once an entire family with three babies! 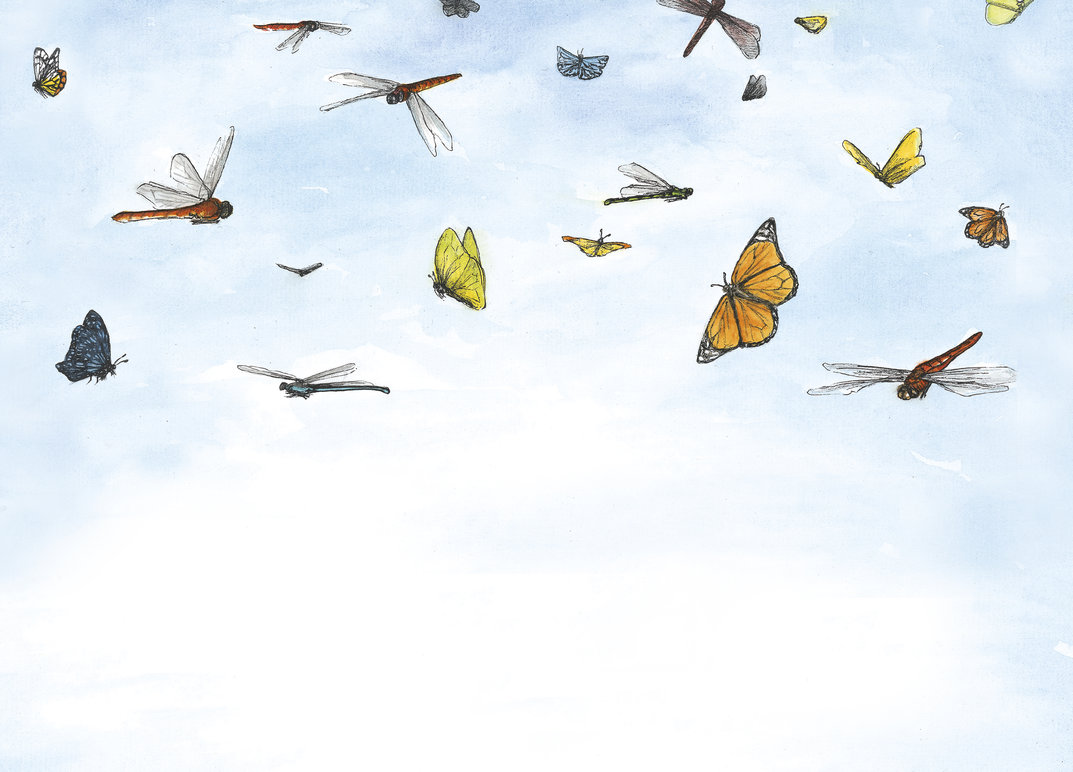 And where there were mongooses, could the snakes be far behind? Indeed I was lucky enough to see chequered keelbacks, pretty water snakes, swimming between the reeds. 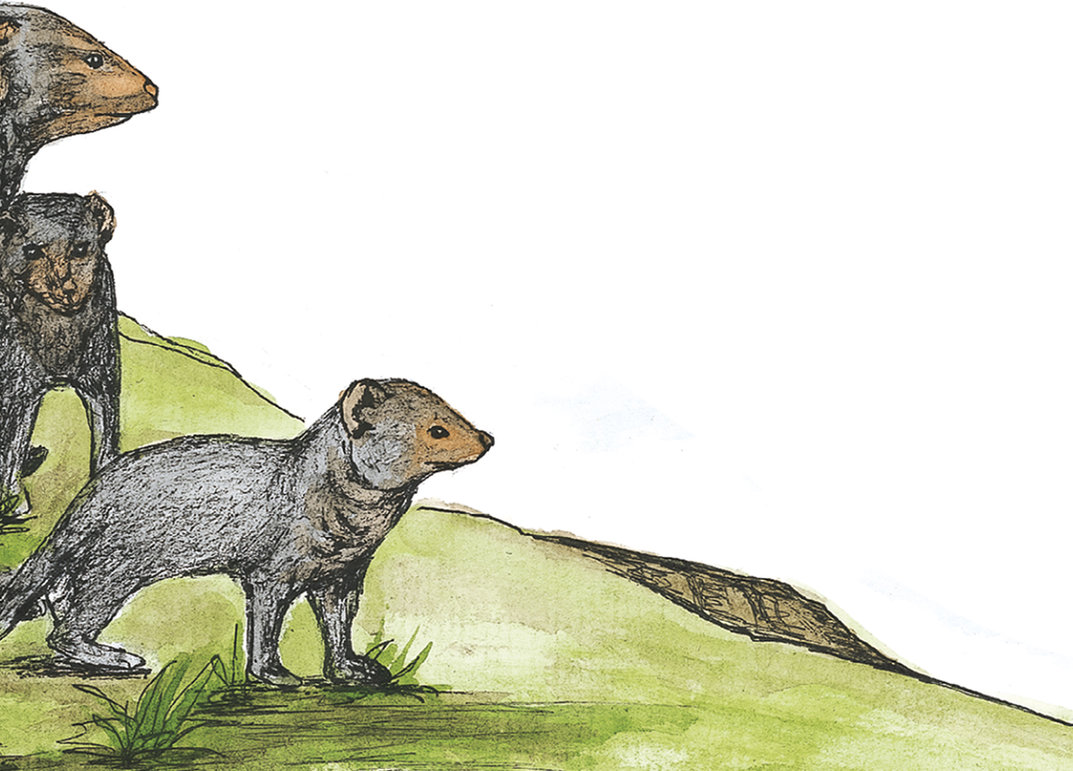 But what caused the deafening noise in the night? Frogs and toads in their hundreds, croaking and singing away to attract their mates! They were joined by crickets that seemed to have built-in loudspeakers, clinging to the reed blades. Listening carefully, I soon learnt to appreciate this symphony with its own rhythms. 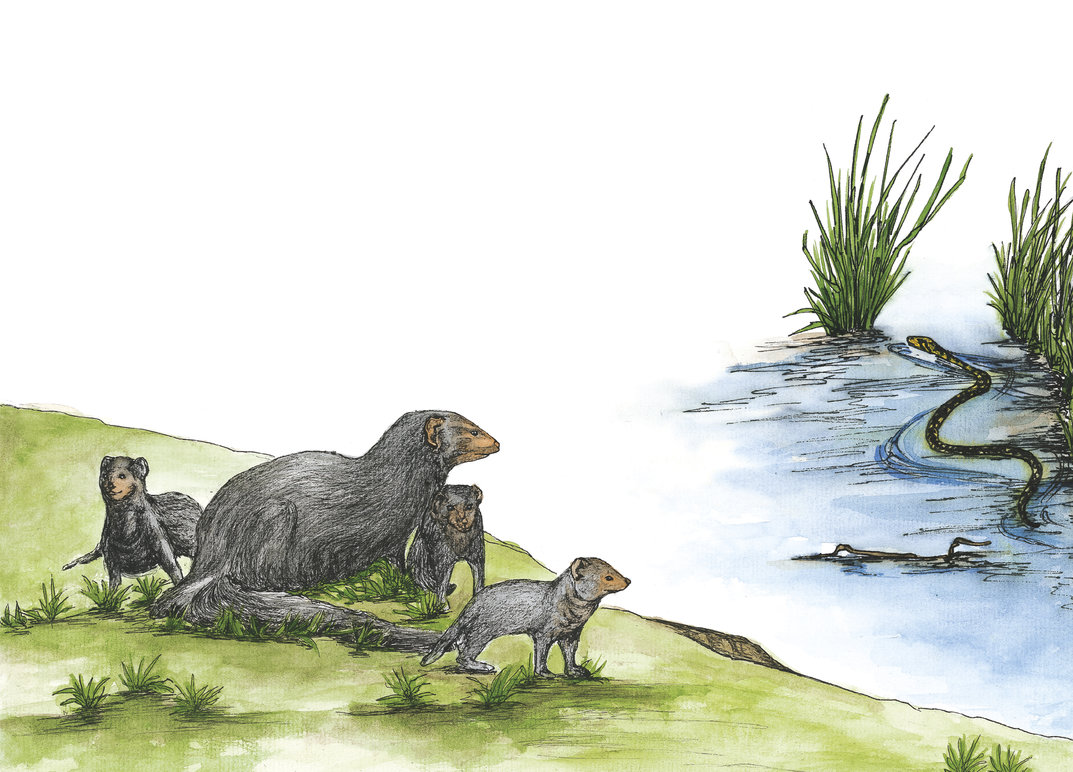 The night-time symphony had occasional guest appearances: the spotted owlet, bobbing up and down comically as I shone my torch on it, and the Indian nightjar, aptly named for its rather harsh ‘chuk-chuk-chrrrrr’ continuing almost through the night. 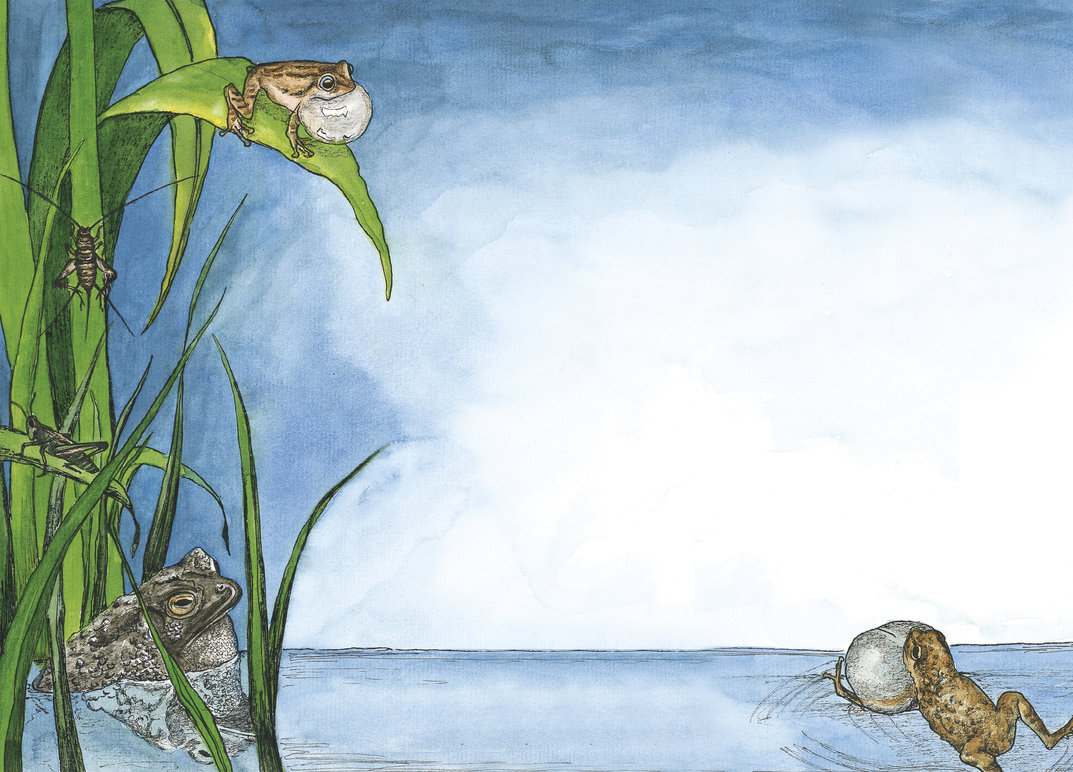 One day I got the scare of my life! No, not from snakes, nor from herons with mean-looking beaks, but rather, from some people walking around Flapshell Pond, looking like they were surveying the area. I found out from my neighbours that they were planning to drain the wetland and make buildings on it! My heart sank. I could not let this happen. A friend and I mobilized the neighbourhood kids. We invited a couple of press reporters. The next day, the newspapers carried news of the children’s appeal. Other residents of the area also started calling up various officials to tell them to save the pond. Then a couple of environmental organizations joined in. We invited the city commissioner too. At first, he was not convinced, but when he experienced the monsoon magic, he realized it would be a shame to destroy the pond. 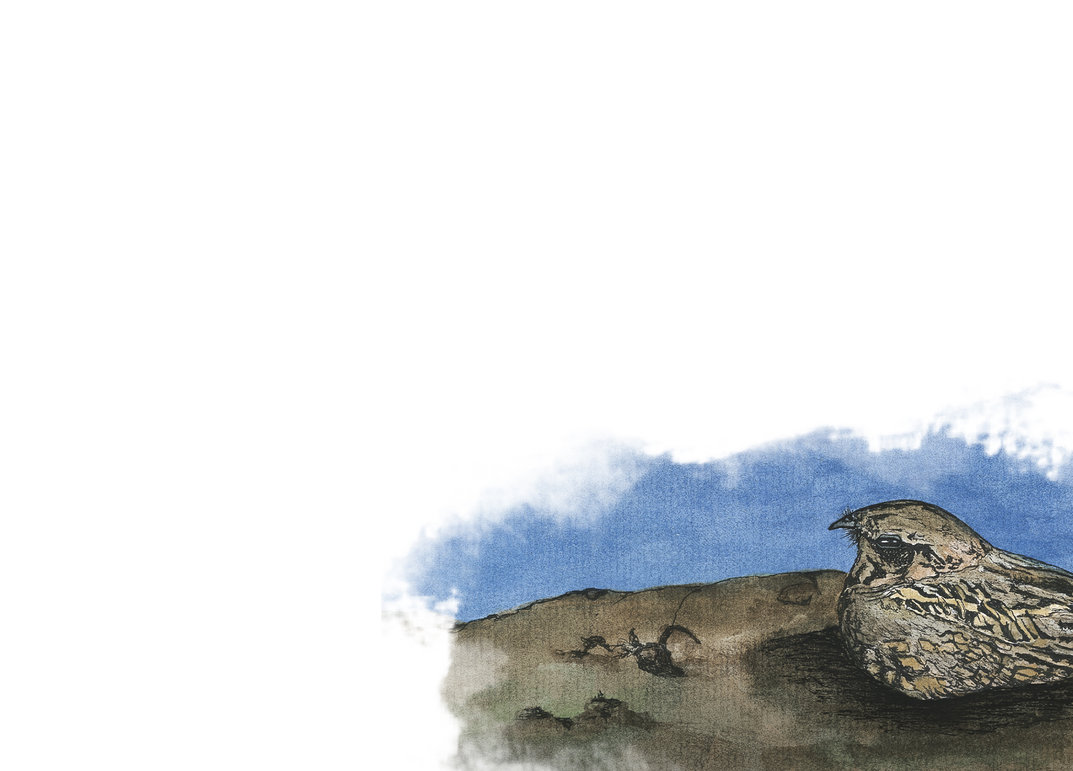 Finally, all this did the trick. Flapshell Pond was declared off-limits to any construction! How lucky I was to have experienced monsoon’s magic! 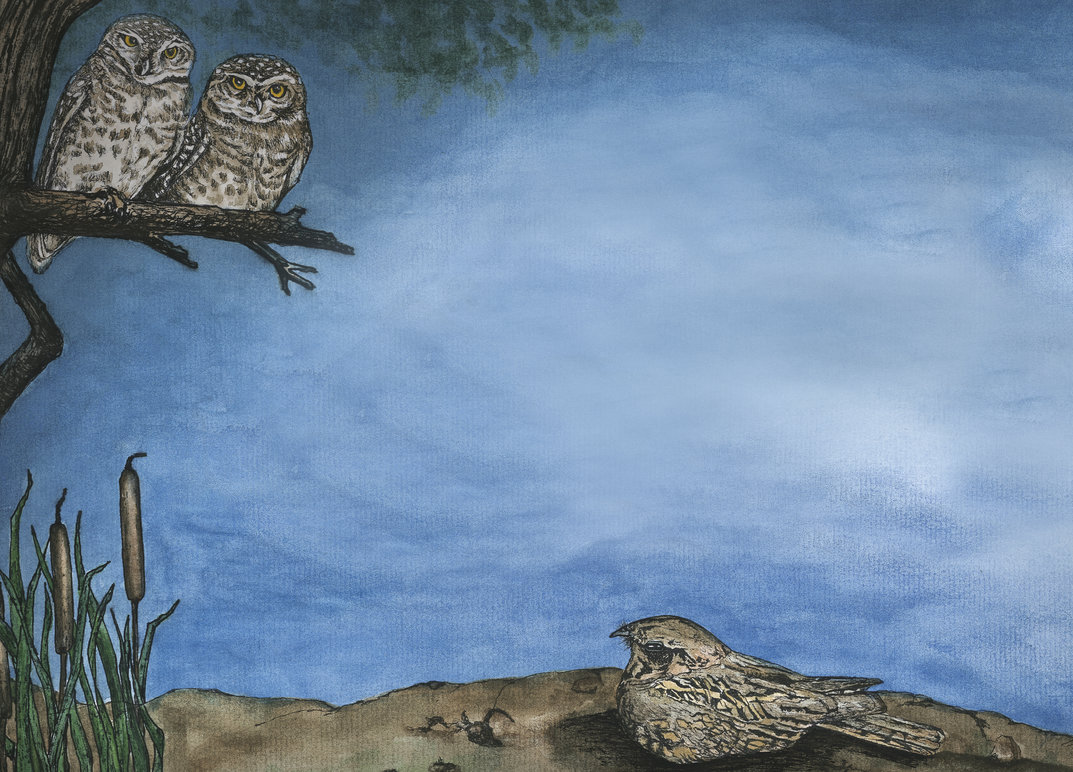 Here was a mini-sanctuary in the middle of a bustling city, with its multiple symphonies. Here, nature’s dance could continue, providing life to thousands of creatures big and small. Sometimes, magic is found in one’s own backyard! 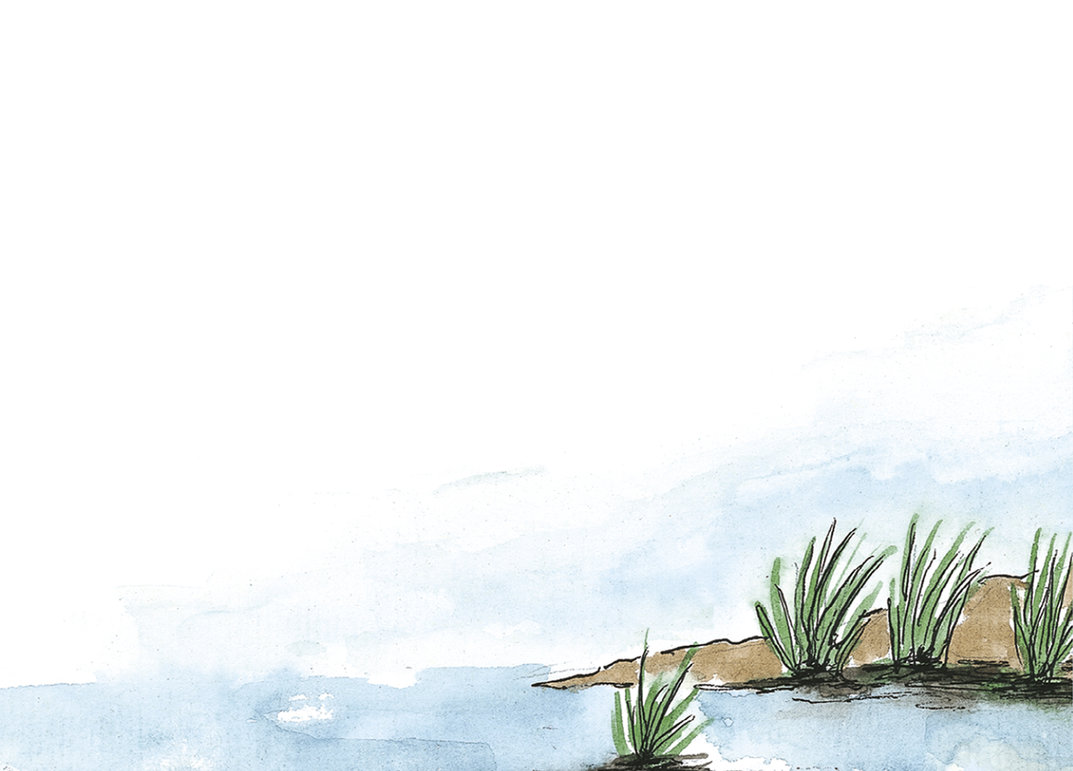 Save a Pond! Do you have a pond near your house? Have you observed the diversity of life in and around it? Is it threatened by construction or pollution? If it is, can you get together with your friends and parents and their friends, and tell everyone that you want it saved? And if people who want to build on it ask why you want it saved? A simple answer: because birds and insects and other animals also need a home to stay in! 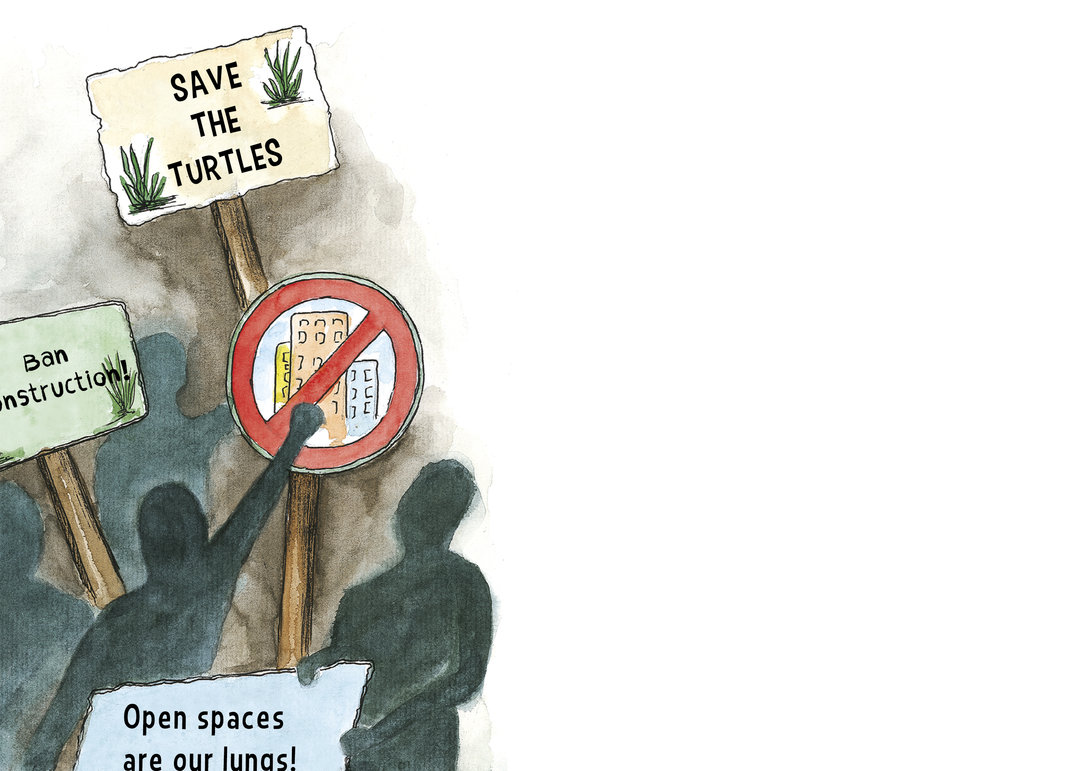 Would it not be wonderful if there were thousands of such city ponds, with wildlife of all kinds? You could join children and adults in various parts of the world, through your computer networks or even snail mail, sharing photos and stories of what you see there, and how you managed to save them! 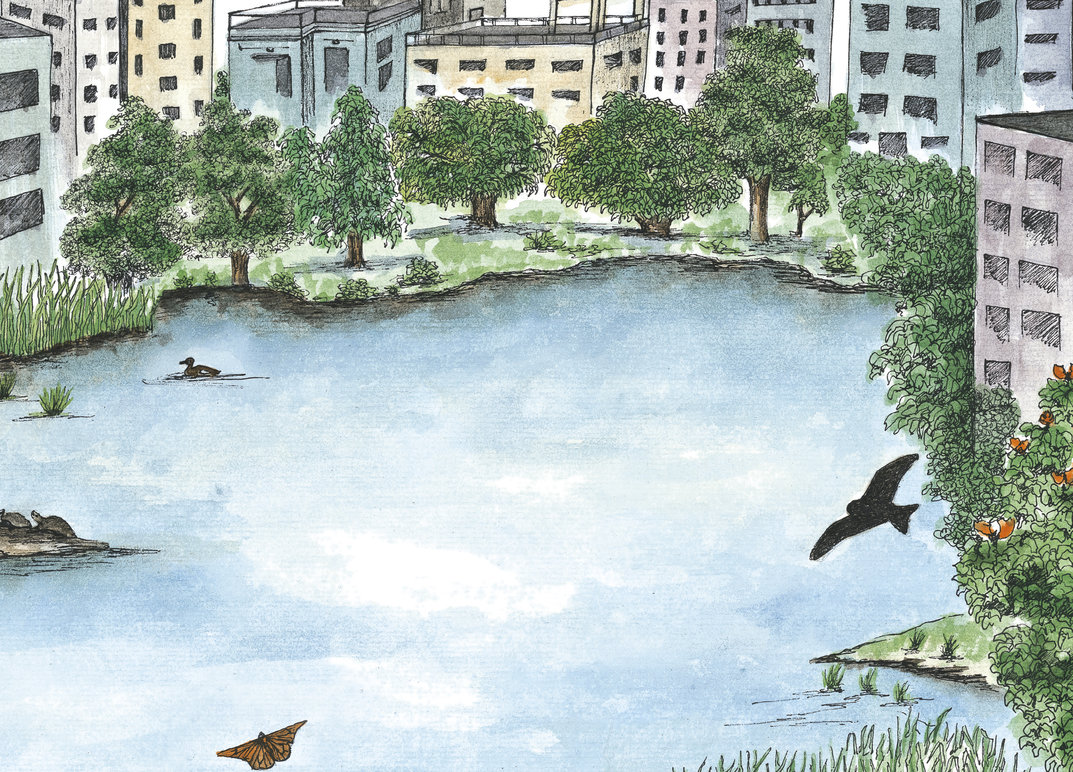